Thriller with a stutter 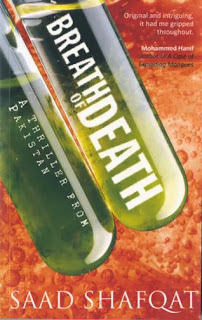 (A shorter version was in this month's The Hindu Literary Review)
Saad Shafqat’s Breath of Death is quite the ‘thriller from Pakistan’ it’s positioned as. It’s also a socio-political commentary on Pakistan and an examination of the often fraught, rather complicated relationship between Pakistan and the US.
And it is this relationship between the US, Pakistan and the larger Islamic world that provides the context for the book’s relatively straightforward plot. Dr Asad Mirza, a talented, youngish neurologist and Nadia Khan, an eager medical student, encounter a mysterious neurological illness in the wards of a Karachi teaching hospital. While attempting to solve the puzzle of this strange infection, the two walk right into the middle of a bio-terrorism plot against the US.
Both Karachi and the intricacies of the human brain are familiar territory to Shafqat, a neurologist who lives in the city. And this knowledge shows. He writes with authority and confidence about things that happen in the hospital and in the city.
The writing, though, is often jerky, with abrupt transitions. Yet, it’s also very descriptive and evocative, painting portraits of people and places. Shafqat has an eye for detail, and the images he builds are so powerful that I could almost see, touch and smell them.
Characterisation is one of Shafqat’s strengths and almost all the characters seem very real. Even the ‘bad guys’ like Hamza Kadri, the scientist who designs the bio-weapon and Malik Feysal, the zealous operative of the terrorist ‘Network’, are portrayed as multi-layered beings. Sample this description of the fussy, irascible, obsessive-compulsive Hamza Kadri: “Noticing a speck of grit on the machine’s shiny Perkin Elmer monogram plate, he flicked it off with a finger. Then he fidgeted with his trousers, adjusting them over his hips again. He stuffed in his shirt. Then, noticing a fold that wasn’t quite right, he pulled it out and stuffed it in again.”
Shafqat, also deftly captures the love-hate relationship that many people in Pakistan — and South Asia perhaps — seem to have with the US. An equation that’s equal parts fascination and frustration. Even Asad Mirza, the book’s principal protagonist, who’s studied and worked in the US, is not completely free of this sentiment. As Shafqat writes early on in the book: “Deep down, all of them, even Asad, felt aggrieved by America’s overreach around the world although not everyone was willing to acknowledge it so openly.”
Yet, Asad’s disquiet with certain aspects of US policy does not prevent him from doing the right thing. Despite several challenges, he is able to alert the US authorities about the bio-terror plot and all ends well.
My one big grouse with Breath of Death is with the plot’s pace. Like many of the soap operas on television, it chugs along very sedately and then, before you know it, it’s all over. The ending is so hurried that it seems shoehorned into the plot.
In fact, the last few chapters of the book didn’t quite work for me; at least not in the way the early chapters did. For one, I found the whole sub-plot built around Nadia’s trip to the US to intern at a lab in Boston almost contrived. This thread doesn’t quite add to the story, expect, perhaps, to bolster the thesis about Pakistani disquiet with “America’s overreach around the world”.
Also puzzling is a lack of attention to detail that creeps in towards the end of the book. A telling example is how Nadia carries a biological sample in her backpack when she travels to the US. She’s got no clearance from the US authorities to do this and seems surprised when US customs confiscates the specimen. It is hard to imagine how Asad and Nadia’s hosts in the US, both prominent medical researchers, thought she could simply enter the country with a biological specimen in a flask of formalin.
I also do wish that Shafqat had given a bit more detail about how the virus designed by Kadri worked. I know the plot hinges on deploying an aerosol-based delivery system. But what is not clear is just how the virus was tested in Karachi. For instance, how is it that the test subjects alone were infected by the virus, while the people around them were untouched by the ‘breath of death’.
Despite these bumps, I quite enjoyed Breath of Death. It is an interesting and intriguing tale told rather well.
Posted by Sankar Radhakrishnan at 7:14 PM