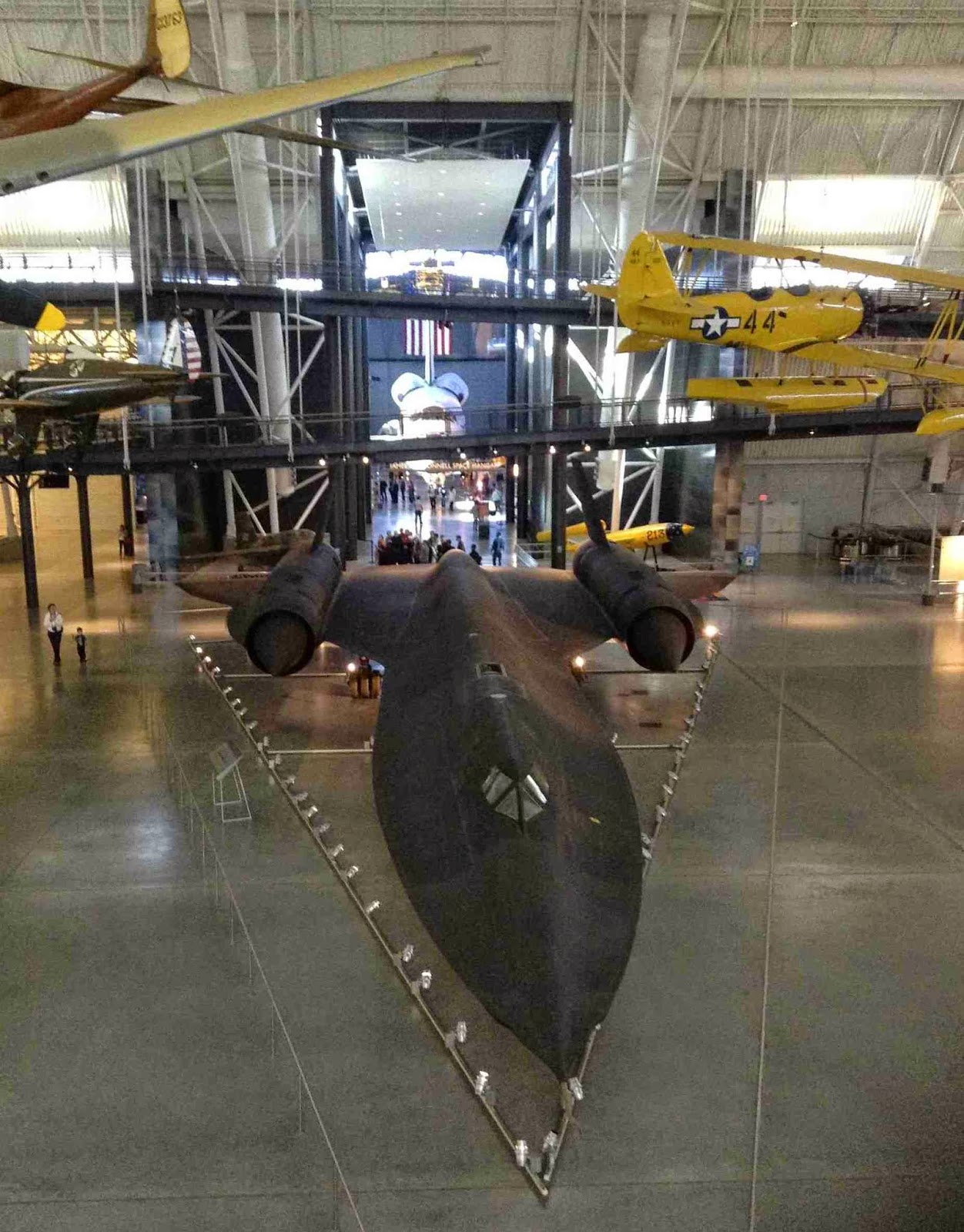 Did a version of this story for the March issue of National Geographic Traveller India magazine.


My heart begins to race, even as my breath slows. Roosting on the polished floor, almost within arm’s reach, is something that has fascinated me for years: a ‘Blackbird’. Officially known as the Lockheed SR-71, the Blackbird is the world's fastest jet-propelled aircraft and flew reconnaissance missions for the US during the Cold War, before being pulled from service in the mid 1990s.
Aircraft have always interested me, possibly because of childhood exposure to military aircraft courtesy my aeronautical engineer father. My fascination with the Blackbird, though, began when I encountered it in Frederick Forsyth’s The Devil’s Alternative: “On a single thin nose wheel assembly, the bullet-like nose cone thrust upward at a shallow angle. Far down the fuselage, wafer-thin wings sprouted, delta shaped, being both wings and tail controls all in one… Body and engines resembled three hypodermic syringes, linked only by the wing. Small white U.S. stars in their white circles indicated its nationality; otherwise the SR-71 was black from nose to tail.”
But that wasn’t quite the real deal. So when a trip to Washington DC came my way, on my ‘must visit’ list was the Smithsonian National Air and Space Museum’s Udvar-Hazy Center in Virginia. Described as a companion facility to the better known Air and Space Museum in downtown Washington DC, the Udvar-Hazy Center is aircraft heaven for an aviation buff. Its two cavernous hangars, adjoining the Dulles International Airport, house several hundred aviation and space-related artefacts including stars like the space shuttle ‘Discovery’, a Concorde and, of course, a Blackbird.
As I enter, the Blackbird is virtually the first aircraft I see, with the bulk of the Discovery looming in the distance. I learn that on its last flight on 6 March 1990 this particular SR-71 set a speed record, flying from Los Angeles to DC in 1 hour, 4 minutes and 20 seconds — an average speed of about 3,418 kilometers an hour!
Wandering through the Boeing Aviation Hangar, it strikes me that many of the aircraft on display have played a part in events that shaped the history of the world. The Boeing B-29 ‘Superfortress’ ‘Enola Gay’ changed the course of World War II when it dropped the atomic bomb on Hiroshima. Others, like Bell’s UH-1H ‘Iroquois’ or ‘Huey’ helicopter were, literally, the face of the Vietnam War.
Aircraft in the museum’s collection have also played less muscular roles in history. The pencil-thin Air France Concorde that straddles one wing of the aviation hangar was the first supersonic airliner to fly from Paris to Rio de Janeiro, Washington DC and New York. And high up, almost near the hangar’s roof is the ‘Spirit of Columbus’, a Cessna 180, that Geraldine ‘Jerrie’ Mock flew in her record-creating feat to become the first woman to pilot an aircraft around the world.
I spend so much time with the aircraft that there’s little time left for the James S. McDonnell Space Hangar’s collection of rockets, missiles, satellites and other objects used in human spaceflight. Besides the Discovery, I make obligatory stops at the Mars Pathfinder Lander and a Mobile Quarantine Facility for astronauts returning from the Moon.
From a catwalk on the upper level I get a birds-eye view of the museum’s restoration hangar with several plastic-shrouded aircraft. My time is almost up, so I dash back to the aviation hangar for a rendezvous with the F-14 ‘Tomcat’, a fighter I first discovered thanks to the film Top Gun. There’s also just enough time for one last circumambulation of the Blackbird to end an aviation-fuelled morning.
As I leave the Udvar-Hazy Center, I realise that I’ve not sampled its other pleasures — the observation tower with its views of Dulles airport, the simulator rides and the Imax theatre. But then, there’s always next time I tell myself.
The Vitals


The Smithsonian National Air and Space Museum Steven F. Udvar-Hazy Center is at 14390 Air and Space Museum Parkway, Chantilly, Virginia, close to Dulles International Airport. The museum is open 10 am to 5.30 pm on all days except December 25, with free conducted tours at 10.30 am and 1 pm. While entry is free, the simulator rides and Imax shows are ticketed. Public transport options to the museum include the Metro Sliver Line from DC to the Wiehle-Reston East station, transferring to the FairfaxConnector Route 983 bus to the museum. Alternatively, take Metrobus 5A from L’Enfant Plaza in DC to Dulles airport and a taxi or the Fairfax Connector Route 983 bus to the museum. For more: http://airandspace.si.edu/visit/udvar-hazy-center/
Posted by Sankar Radhakrishnan at 10:42 AM