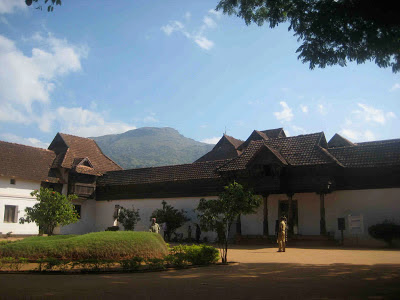 (A version of this was in National Geographic Traveller India’s May issue. The story’s not on the Nat Geo website, so there’s no link.) 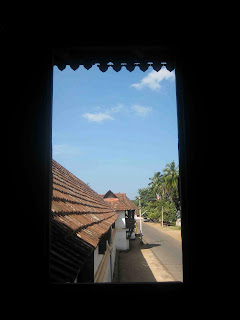 I’m tempted to linger, but lose the battle to thirst and head out. Once I’ve had a couple of tender coconuts I head back to the administrative offices and meet R. Jayashree, the museum assistant. I explain my mission — the hunt for the plaque — and she’s as helpful as can be. She takes me into an adjacent office where there’s a plaque hidden behind a stack of boards; but it has no mention of Vasudeva Poduval. Sensing my disappointment, Jayashree reassures me that she has seen his name in the palace’s files and departmental correspondence. My quest for the plaque ends right there, but I decide to stay a while longer, anyway.
Back out in the forecourt, I watch the crowds of visitors, the symphony of the palace’s roofs and the ever-present Veli hills in the near distance. It strikes me that the master builders who designed and built the Padmanabhapuram palace have achieved a deft balance between material, space and light to create a very sophisticated yet self-effacing building.
As Sushil Pillai tells me later, Padmanabhapuram palace represents a very unique Kerala sensibility; an innate sense of proportion and elegance and the subordination of the individual architect. What, I ask, is it about Padmanabhapuram that draws him. He pauses for a second or two and says: “It’s a bit like falling in love.” I can’t but agree.
Posted by Sankar Radhakrishnan at 11:59 AM

Well written Sankar. I enjoyed the tour of the palace through your eyes. Now I feel i should visit the palace someday.

@Amrita: Yes you should visit, the next time you're here.