Understanding the logic that underpins infrastructure projects in India is often a bit like trying to solve a puzzle. And in Kerala it is even more so.
The City Road Improvement Project — better known by the rather inapt acronym CRIP — in Trivandrum is one of those infrastructure projects that sometimes befuddle. In theory, the project is intended to transform 42-odd kilometres of Trivandrum’s roads into world-class thoroughfares. In practice, some road surfaces have improved, but there have also been inexplicable screw-ups. 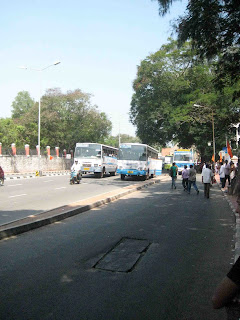 Consider the picture above. It is of a ‘bus bay’ about 100 metres from a very busy junction on the city’s arterial MG Road. Bus bays are useful, but the thinking that has gone into designing this one seems iffy.
As the picture shows, one bus has stopped outside the bay, almost in the middle of the road, and the other has stopped ahead of the mouth of the bay. 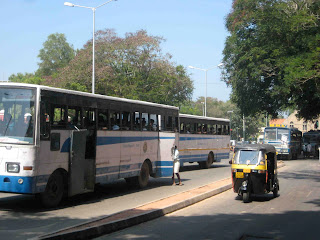 Over the course of a morning last week, I found that about 50 per cent of the buses that went past stopped outside the bay. And in the process blocked the road and created traffic snarls. This, I agree, is a problem of enforcement — the police needs to ensure that every bus uses the bay. But this is a route with a high volume of bus traffic and most buses stop at this point. So if every bus that passes by uses the bay — that can accommodate about two-and-a-half buses at a time — there would probably still be a traffic jam during the peak hours. This implies that the bus bay is simply too small to cater to peak hour traffic; which, to me, seems to be a design flaw. 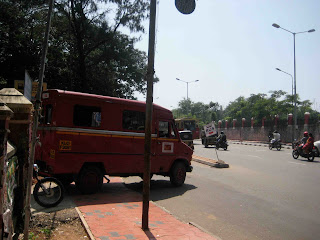 Which brings me to the next inexplicable aspect of the bus bay’s design. The entrance to the bay is about a foot or two away from the exit from an important government office complex. As a result, every vehicle that comes out of the office complex ends up blocking the mouth of the bus bay, at least for a second or two, laying the ground for a series of micro traffic snarls through the day as the picture above and the one below show. 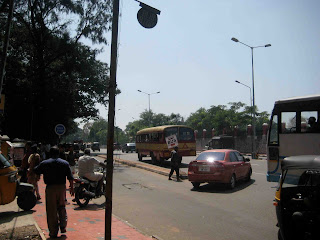 Given the constraints of this stretch of road, this is perhaps the only design possible for the bus bay. But that begs the question — Why have a bus bay at all, especially if it creates more problems than it solves?
That, perhaps, is a riddle that may never be solved.
Posted by Sankar Radhakrishnan at 4:54 PM