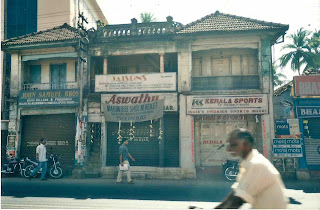 There’s much that is fascinating about Kerala. What I find — or should I say used to find — especially captivating though is how many of the state’s traditional retail spaces were designed.
Visiting Kerala in the 1970s and early 80s, and living in Trivandrum from the mid-1980s, it was refreshing to see these unfussy, classic buildings. With their tiled roofs and verandahs that offered protection from the sun and the rain, and often a place to pass the unrelenting hour, these buildings brought a certain character to their neighbourhood. 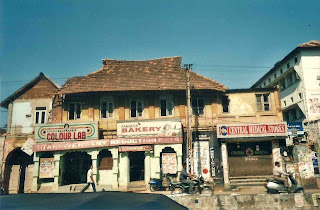 Not all were old, tiled buildings — there were more recent, art deco-ish structures that sprouted among the more traditional-looking ones. But they all radiated a certain charm, despite the odd monstrosity. 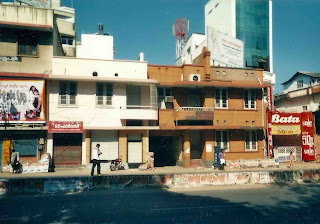 Especially alluring were the doors that some of these buildings had: Numbered planks of wood that were — at closing time — slotted into a groove and pushed along till they clicked into place and formed a wall of timber. All held together by an iron rod or bar, secured with a padlock. 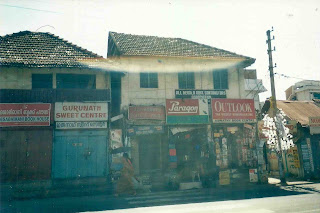 But change is almost inevitable; arguably the only constant in life. And by the late 1990s, there was much more concrete and mirrored glass across Kerala’s retail landscape. 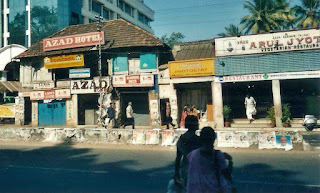 Today, many familiar names remain, but in new clothes and sometimes in new locations. And here and there some holdouts linger, with their tiled roofs, jigsaw-puzzle doors and glass jars, enveloped in the faint aroma of time.
Posted by Sankar Radhakrishnan at 10:16 PM